“Art is a game between men of all times”

This program is presented as a process of artistic awareness and development through improvisation. People who come in an environment of empathy and cooperation in which it is possible to enjoy are welcomed. A requirement that we consider essential in any form of learning.

Through group work and individual work, interaction meta-patterns are created and learned and an epistemology is developed that favors the creative autopoiesis of each participant in the field of musical practice and, by extension, in other areas of their experience.

In the music made for this video, musicians who had only been on the program for a few months improvised:

This piece of music was generated spontaneously through the interaction of the attendees, in a collective improvisation experience that occurs weekly. We have been able to verify that the cyclical appearance in a meeting of these characteristics has a very high pedagogical value and many of the absolutely essential functions for creating music can be carried out in this way. Afterwards, image and sound were incorporated into improvisation, until the present version was achieved as a derivative work.

Listening to music, playing it, and creating it involves practically all brain regions. Music listening relates first to the subcortical structures of the brain, such as the cochlear nuclei, the brainstem, and the cerebellum. From there, it acts on the auditory cortex, on both sides of the brain. When listening to music, brain memory centers, such as the hippocampus and language centers in the frontal and temporal lobes, are activated.

Tapping also involves the cerebellum, and the frontal lobe, sensory cortex, and motor cortex will also be activated. This happens because when playing requires motor coordination and control, the somatosensory touch and auditory information that many musicians admit to having, makes them develop a great ability to use both hands, compared to other people. The large number of networks that connect the two motor areas between both hemispheres form thick fibers when interconnecting them, making them larger in musicians than non-musicians.

Since the brain has the ability to change (neuroplasticity), music also affects learning abilities, increasing the size of the auditory and motor cortex.

In our culture, music education has inherited a vertical methodology from classical music and its hierarchical organization system (interpreters subordinate to a director), in which the student receives instructions from a teacher who will guide him, throughout a series of years, on what are the tasks to be carried out in your training. The student does not need to consider any initiative of their own, since this pedagogical approach prioritizes skills related to psychomotor intelligence, consisting of reinforcing, through repetition, certain exercises and behaviors that are considered technically essential for a certain type of artistic achievement.

What is not taken into account is that the students who attend music training today, if they do not want to dedicate themselves exclusively to acting, want to develop their own creativity and express themselves through it musically, will build a music whose technical needs will respond to their own style of self-expression, something that is outside the scope of our current vision and will be his artistic response in dialogue with a future that we do not know either.

In other cultures, moreover, music is a vital experience, linked to enjoyment, of horizontal transmission, which takes place in community, as a form of fun. There, virtuosity is not an end and, if it is reached, it occurs beyond correction, error and compulsive repetition. Each new virtuoso is the creator of his own definition of virtuosity.

The same questions were asked by Dr. Charles Limb, from Johns Hopkins University in the USA, and to solve it, he took the trouble to develop an intense study for a whole decade, observing the brain activity of musicians of different styles when improvising.

Along with NIH scientist and researcher Allen Braun, Limb subjected numerous musicians to MRI during improvisation. With the resulting images, the scientists observed that during improvisation, the brain activity presented peculiar changes, especially in the upper regions of the brain and in its inhibition centers. The latter show a significant reduction in their activities.

Furthermore, the researchers also recorded increased activity in the medial prefrontal cortex of the brain, which is located in the center of the frontal lobe. Curiously, this area of ​​the brain has always been related to activities that refer to the personality, subjectivity and consciousness of being as an individual. This part of the brain is generally activated when we are transmitting our individuality, such as when we are telling a very personal story or an anecdote about ourselves. It is the part of the brain that works when it comes to self-expression.

TEMENOS has two versions. A face-to-face version and another online version

IN ORDER TO PARTICIPATE IN TEMENOS ONLINE, YOU NEED A SYMBIONTS INVITATION.

If you are already a registered user of the Busilis network, request an invitation:

If you have not yet registered and you want to participate in either version, or need more information contact us.

If you are already a registered user of the BUSILIS network, and you have not been invited request an invitation (You need to be logged)
If you have already been invited to the forum and are logged in, access 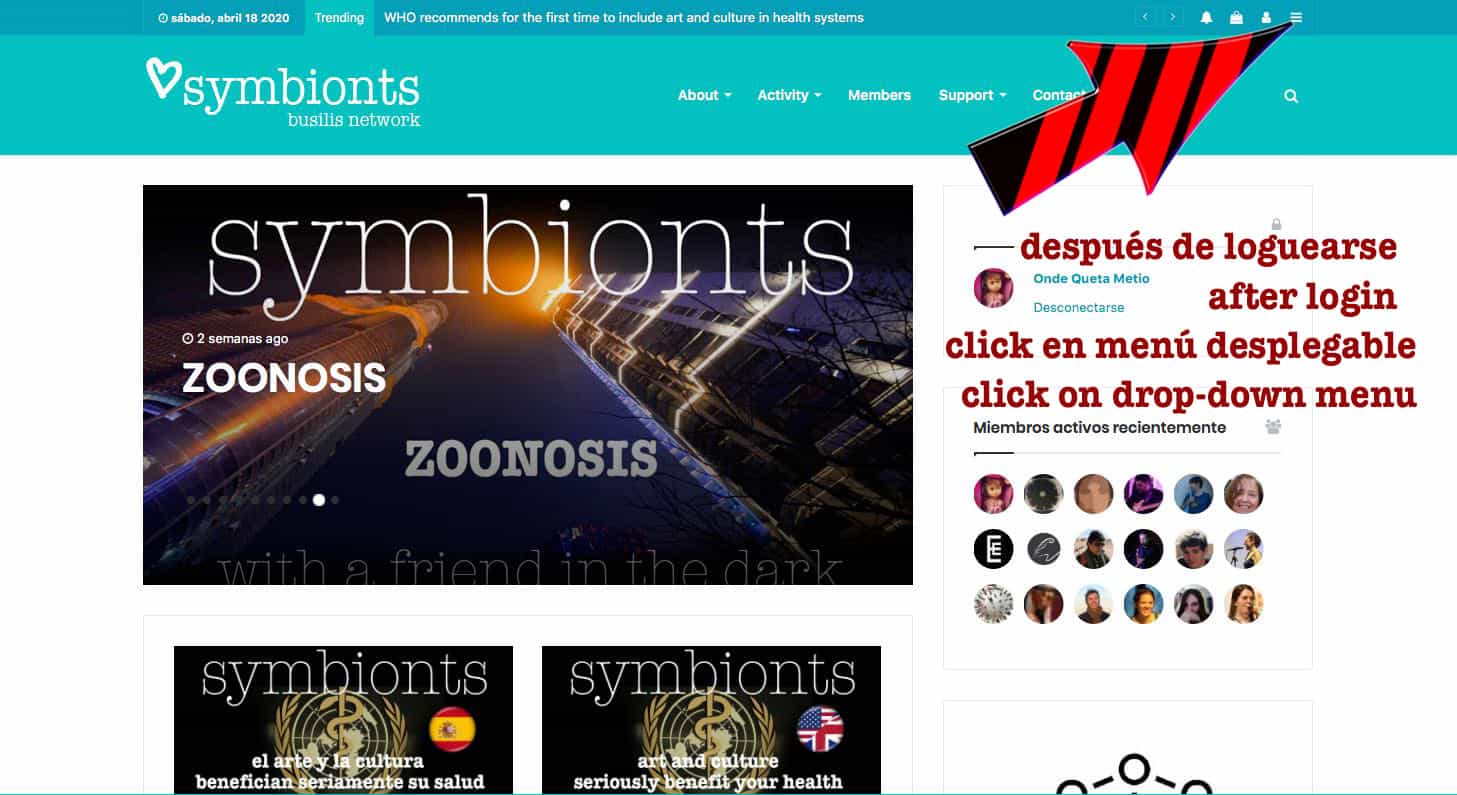 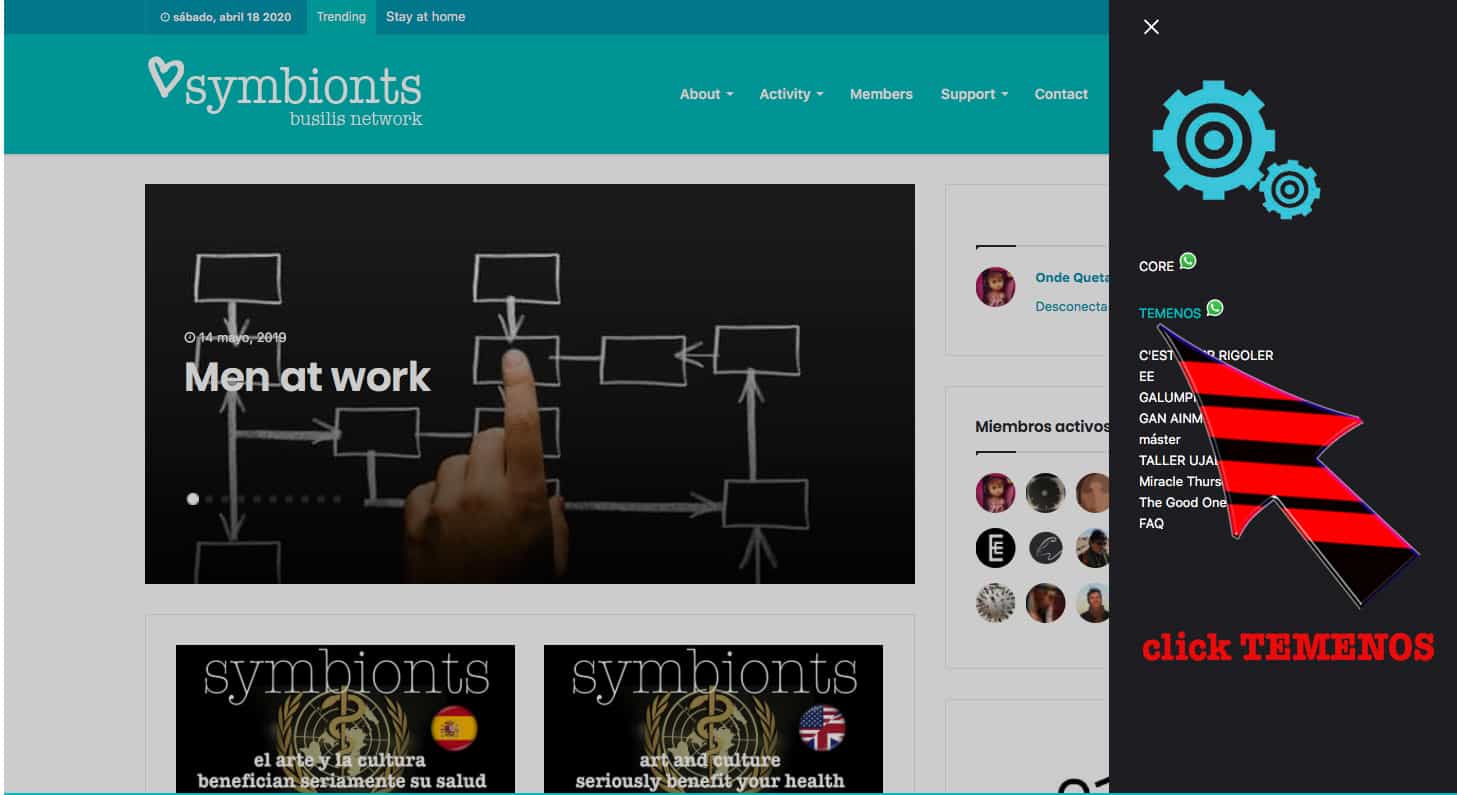 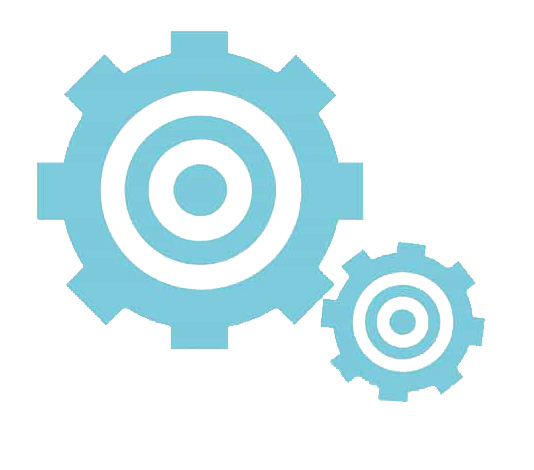 In an (at least apparently) normal setting, such as the one in which we were living a while back, we were already inhabiting a world that seemed to be increasingly disconnected from music and paid more attention to the things that divide us.

Music, on the other hand, is a passion shared by the majority of cultures, with very rare exceptions.

Although the people who play it may enjoy it much more, and this is something that anyone who is lucky enough to have played music for a long period of time knows, it may even have deep effects in our minds and bodies and act as “medicine”, on different health states, for those who are just listening to it. And this is something that we have known for quite some time.

In the pedagogical work -if it can be described as such- that I have been doing for the last thirty years, I have been drawn to two main aspects of the effects that music and culture have on people. Firstly, I experiment with the way in which participating in musical activities through continued active involvement in collective improvisation may influence people’s quality of life and how it may affect their health. Secondly, I have been interested -out of necessity- in the effect that music produces on the altered conscious state of patients suffering from Alzheimer’s disease, since my father died suffering from that strange illness.

This is something that every person involved in the practice of a musical activity can attest to.

And yet, music is not simply a ‘pill’ that doctors can prescribe, as they do antibiotics, and there isn’t a ‘more effective’ kind of music.

Although we see many general response patterns to music in psychological, neurological, biological and physiological data, we also see individual variation. For instance, research in neuroscience has proved how the meaning of music for the individual and the memories it evokes are vital components in our emotional response.

The practical music therapy that I would use with my late father, consisted in -precisely- providing him an evident situation of comfort by reconnecting him with his emotional memory through listening to those repertoires that I knew he had liked throughout his life. After an initial phase of the illness full of violent episodes produced by the horror that witnessing in first person how his memory was being destroyed, he emotionally recognized music as and antidote for that decay, which put him at ease and provided an inestimable help (both for him and for us) in dealing with the illness

We are currently living highly distressing and challenging times, when people are having to deal with concerns regarding their family, friends, jobs and finance, and a they are being forced to remain in strict confinement in droves. And it seems to be an inevitable situation, since this isolation turns out to be vital to guarantee their health.

This is an unprecedented situation and, as some media have indicated, it is impossible to determine the consequences that the cocktail of confinement and uncertainty may produce on the population at large in the long run. However, it is quite easy to realize that the general trend is to lapse into a mood of depression, of isolation and lack of communication that could precipitate a decay in health in potentially more alarming proportions than that of the actual virus.

Those of us actively involved in music do not have an effective remedy for the infection. But we do have a highly effective weapon against these symptoms. Musicians have the responsibility of helping, as far as possible, to redress the situation.

Symbionts has tried from the onset of the pandemic to reinforce one of its research projects in the realm of music practice that has offered the best results among its participants.Témenos is a project that is carried out in person. And this cyclical attendance is combined with a recording of each session on a web archive that constitutes the auditory memory of each of the collective projects that constitute it.

The people who have participated in this project in its face- to-face version, unambiguously report significant benefits to their quality of life, practically from the very beginning.

Currently, Symbionts has implemented, within its online platform, the Busilis network, the online version ofTémenos. This version has the capacity to provide an active musical experience and to boost artistic development while complying with the need for confinement brought about by the pandemic.

Personally, as head of the project, I feel it is my duty to draw the attention of active musicians to the necessity of safeguarding their emotional health so as to be better prepared to help those people who are in a more critical situation to overcome this situation without further damage to their health condition than the one already caused by this strange agent.

Busilis network complements this space devoted to artistic creation with a discussion forum, where participants exchange opinions about the events that we are living. It is a way of overcoming the isolation, something we all need in these circumstances. In short, it is a space open to communication and creativity in these times when both privileges have been suspended.

Neither of these services involves any cost, or any burden for the participants, and it doesn’t serve any other interests than those of the participants themselves, which is why we encourage you to participate and strengthen the initiative.

Those of you who feel with the energy to do so, will be a great help for all of us.

Thank you for your time.